How to become a unicorn founder

Hey we're Mojo and this is what you can expect from us.

We're really interested in pioneers and innovators, those who disrupt legacy industries and make life that little bit easier for people along the way.

Do all the most successful start-up founders have MBAs? Do Harvard, Yale, and Oxbridge produce the biggest, most prosperous entrepreneurs? Are they all based in the world’s tech hubs? We’ve decided to pick apart the stats and look at what the world’s biggest start-ups have in common.


What is a unicorn?

A unicorn is a privately held start-up company valued at over $1 billion.


Where did the majority of unicorn founders study?


With most unicorns originating in the US, India and China, it’s unsurprising to see institutions from these countries come out on top when we look at where unicorn founders went to university. 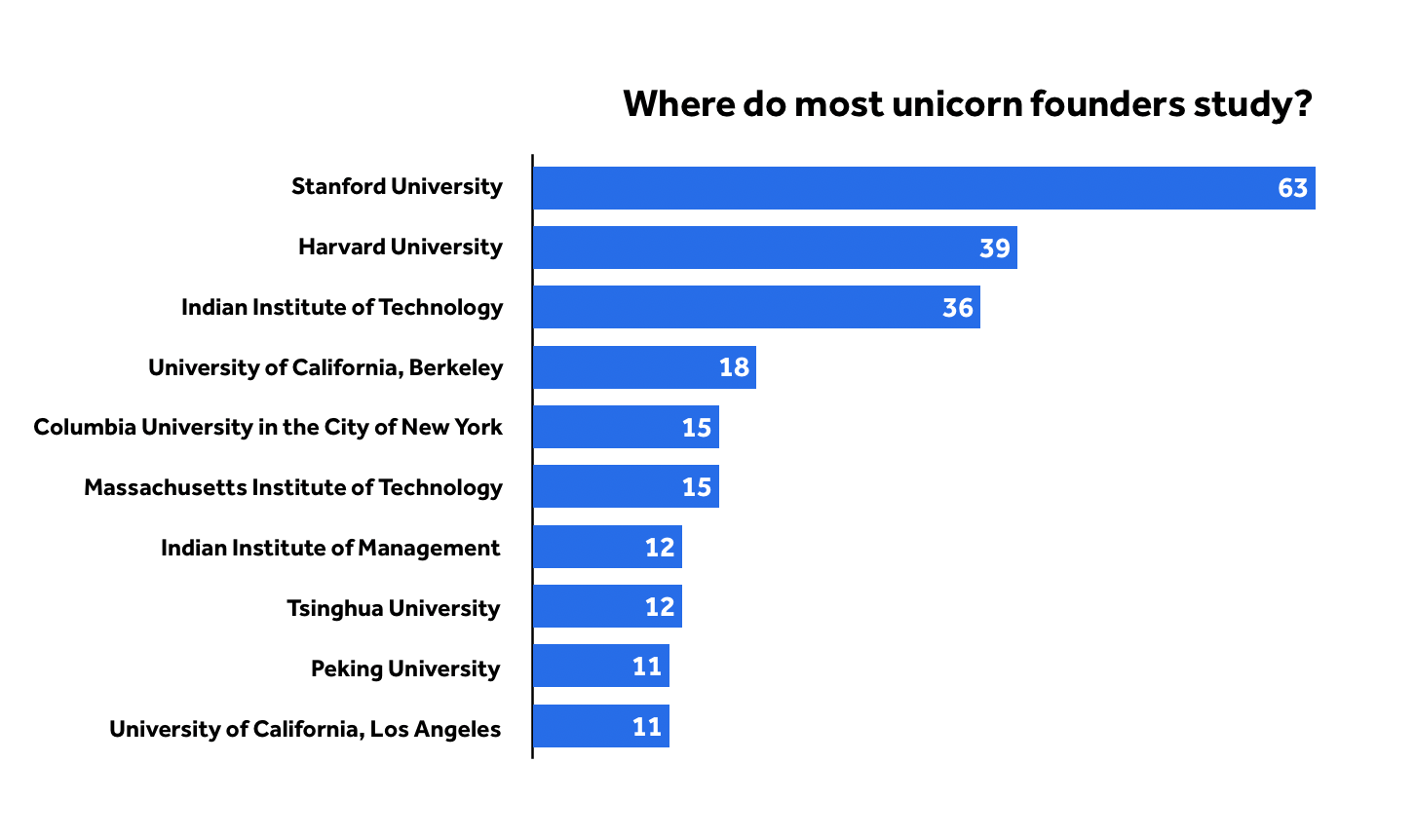 Perhaps due to its proximity to Silicon Valley, Stanford University is the most popular place for unicorn founders to have studied, with 63 of the world’s best entrepreneurs having graduated from the Californian research institute. Harvard finishes in second place with 39 graduating unicorn founders, and the Indian Institute of Technology comes in third with 36 founders.

Notable omissions from the top 10 include other American Ivy League schools like Yale University, Brown University, Princeton University and the University of Pennsylvania, although many of these features in the top 30.

As we move further down the list, we start to see respected European schools including the University of Cambridge, University of Oxford, London School of Economics, ETH Zurich, and the École Polytechnique Fédérale de Lausanne. However, none of these institutions have seen more than 4 unicorn founders graduate.


What subject is most popular for unicorn founders to study?


They may have studied at different universities, but a huge 93 unicorn founders have an MBA. That’s almost 20%. 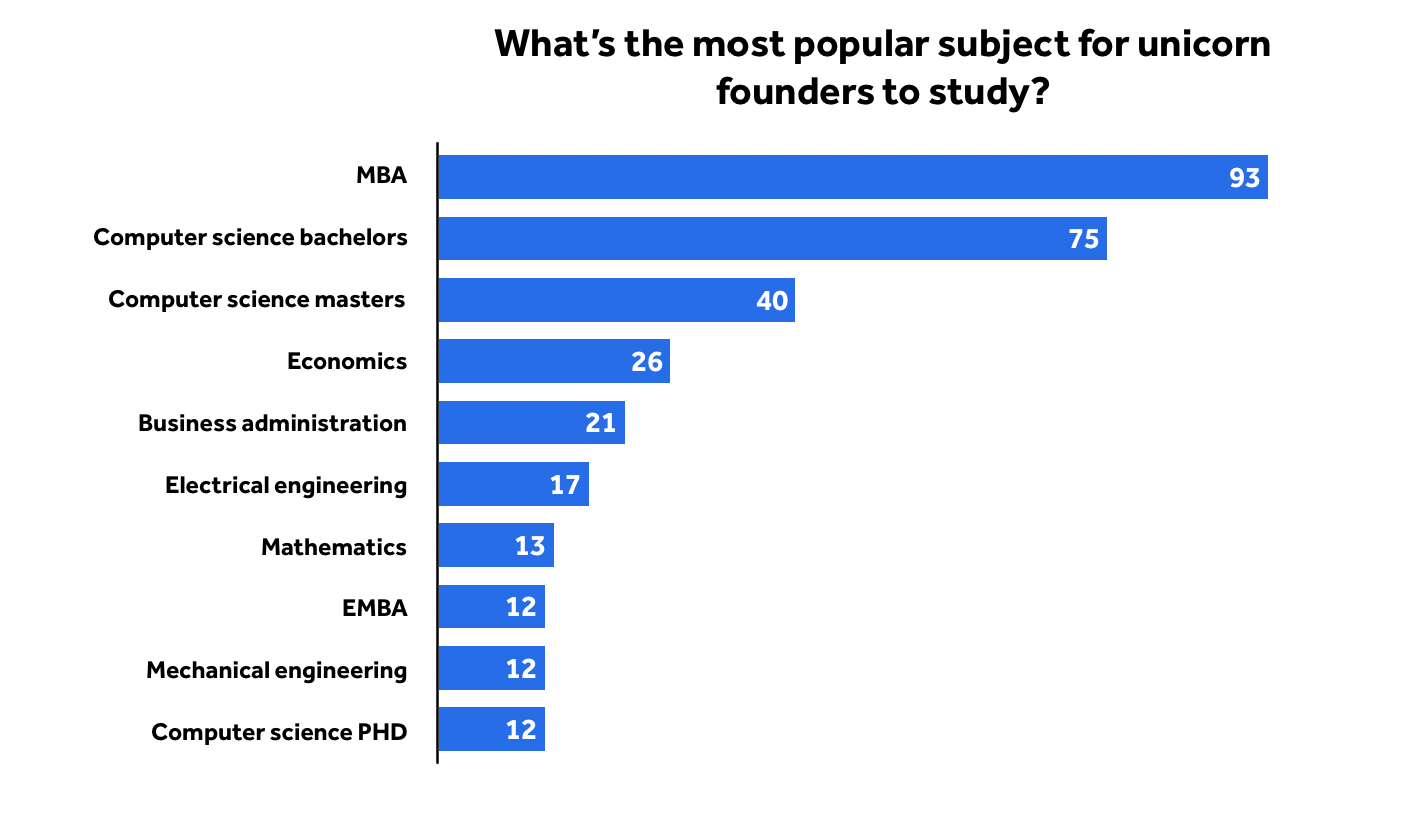 Although MBAs are sometimes undertaken once an entrepreneur has established their business, obtaining such a qualification is largely ubiquitous among the world’s most successful founders which begs the questions: does an MBA turn you into a success, or does the qualification attract like-minded individuals from the get-go?

When it comes to levels of academic qualifications, having a degree of some sort is universal across unicorn founders. From our research we found 462 of them had undergraduate degrees, while 230 had gone on to obtain a postgraduate degree. Of those, half were MBAs or a masters in computer science. There were also 32 doctors among unicorn founders, as well as 13 entrepreneurs who had either not gone to university or who had dropped out part way through.


Which places in the world have the most unicorns?


The US narrowly trumps China in having the highest concentration of unicorns in the world; 115 billion-dollar-valued start-ups were founded in America, compared to the 111 that originated in China. 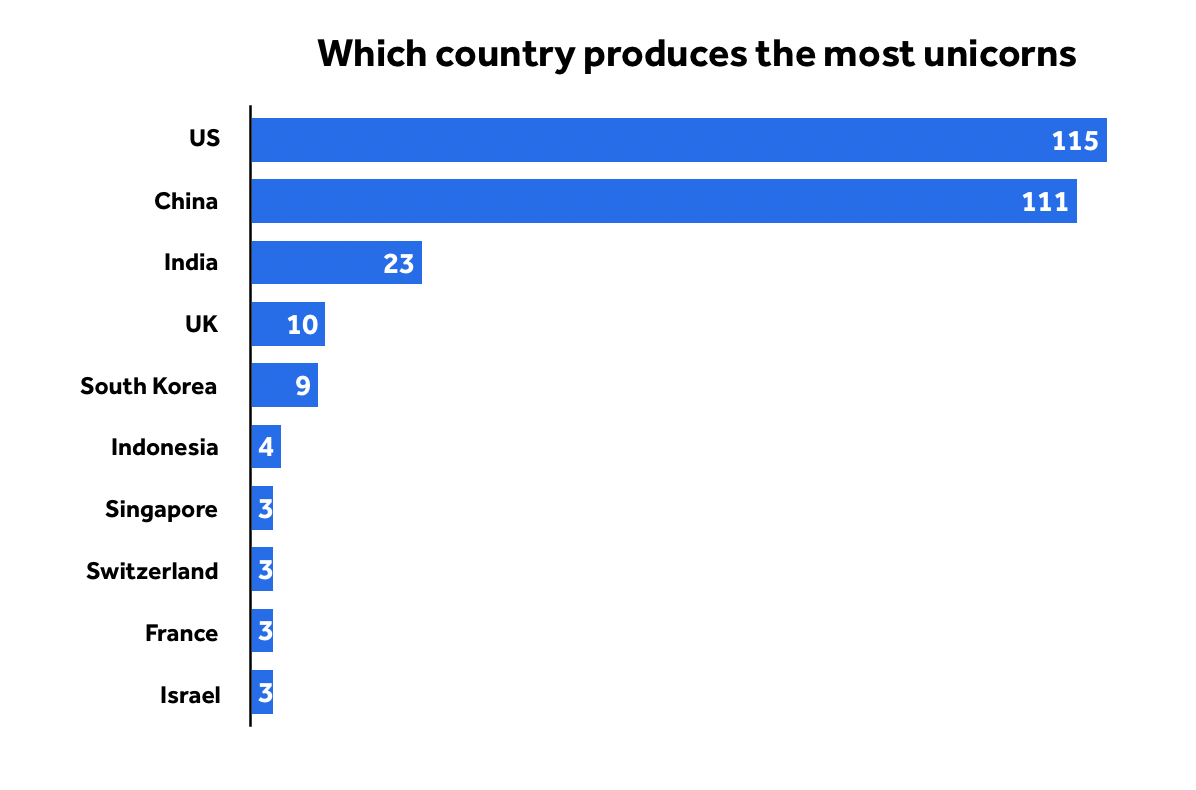 India, the UK, and South Korea make up the rest of the top 5 but have less than 45 unicorns collectively. While several other countries have one or two unicorns, certain global economic superpowers don’t have any, such as Germany and Japan.

Specifically, California has the most unicorns at 71, with 31 situated in Silicon Valley, and 37 in San Francisco. 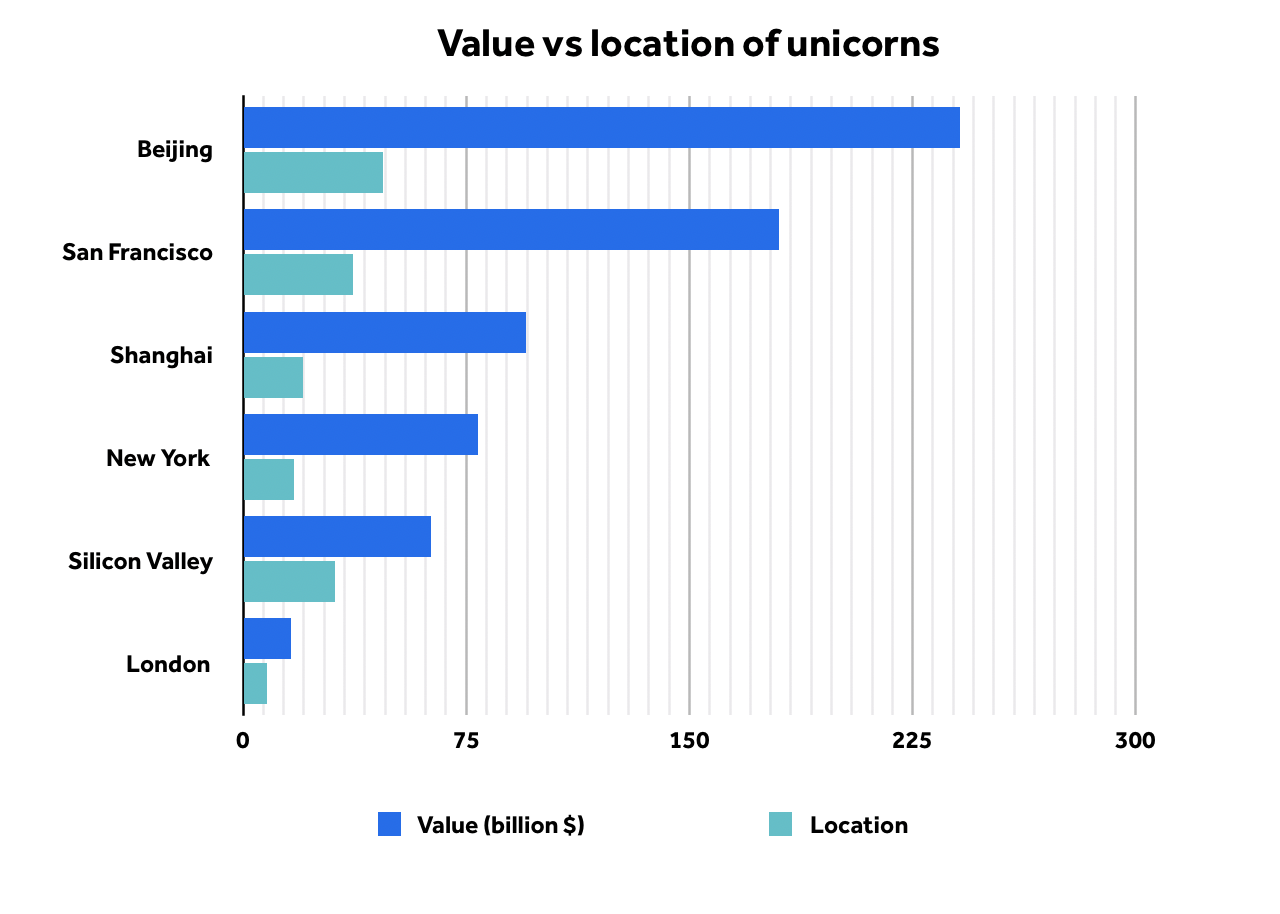 The total value of the San Francisco unicorns amounts to $180 billion, with the 31 in Silicon Valley cumulatively being valued at $63.26 billion.

Both of China’s biggest cities have the next highest number of unicorns, Beijing at 47, and Shanghai at 20. Beijing’s unicorns are worth a whopping $241.68 billion, while Shanghai’s come up just short of $100 billion

Elsewhere, in New York there are 17 unicorns valued at a total of $79.6 billion, and in London there are 8, collectively worth $16.72 billion.


Where do their founders come from?


As expected, most unicorn start-up founders are American – 225 to be exact. The next highest proportion of unicorn founders are Chinese (96) and then Indian (69). 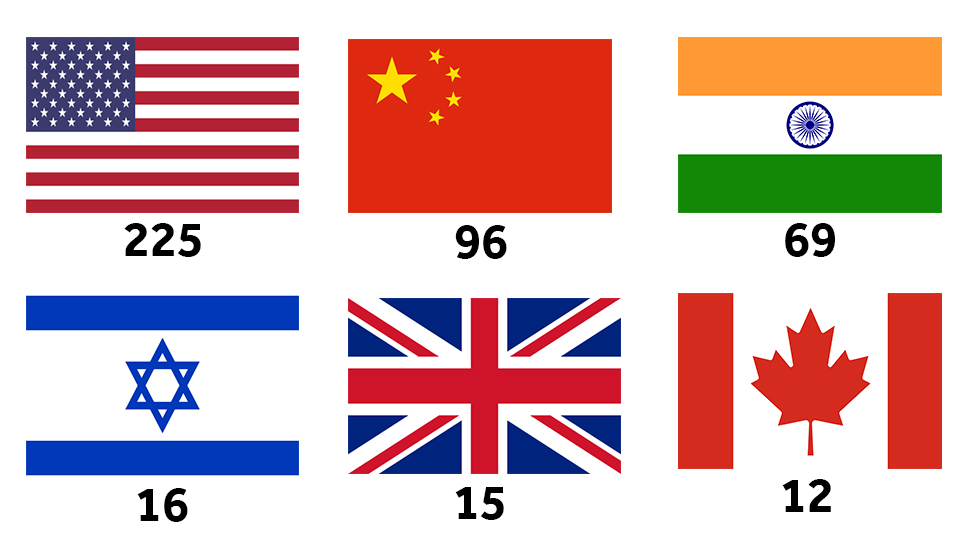 Other successful entrepreneur-rich nations are Israel, Britain, Canada, France and Hong Kong with 10-16 unicorn founders originating in each country. At the other end of the spectrum are Africa, with two unicorn founders and Japan, with none.


At what age does a founder turn their start-up into a unicorn?


The average age of every unicorn founder is 41.15, so if you’re not on your way to running a billion-dollar business by then, it’s unlikely.

Most of the specific entrepreneurs we looked at were between the ages of 35 and 39, with no one older than 80 or younger than 20 when their start-up qualified to be a unicorn. See the table below for a detailed breakdown of the ages of unicorn founders. 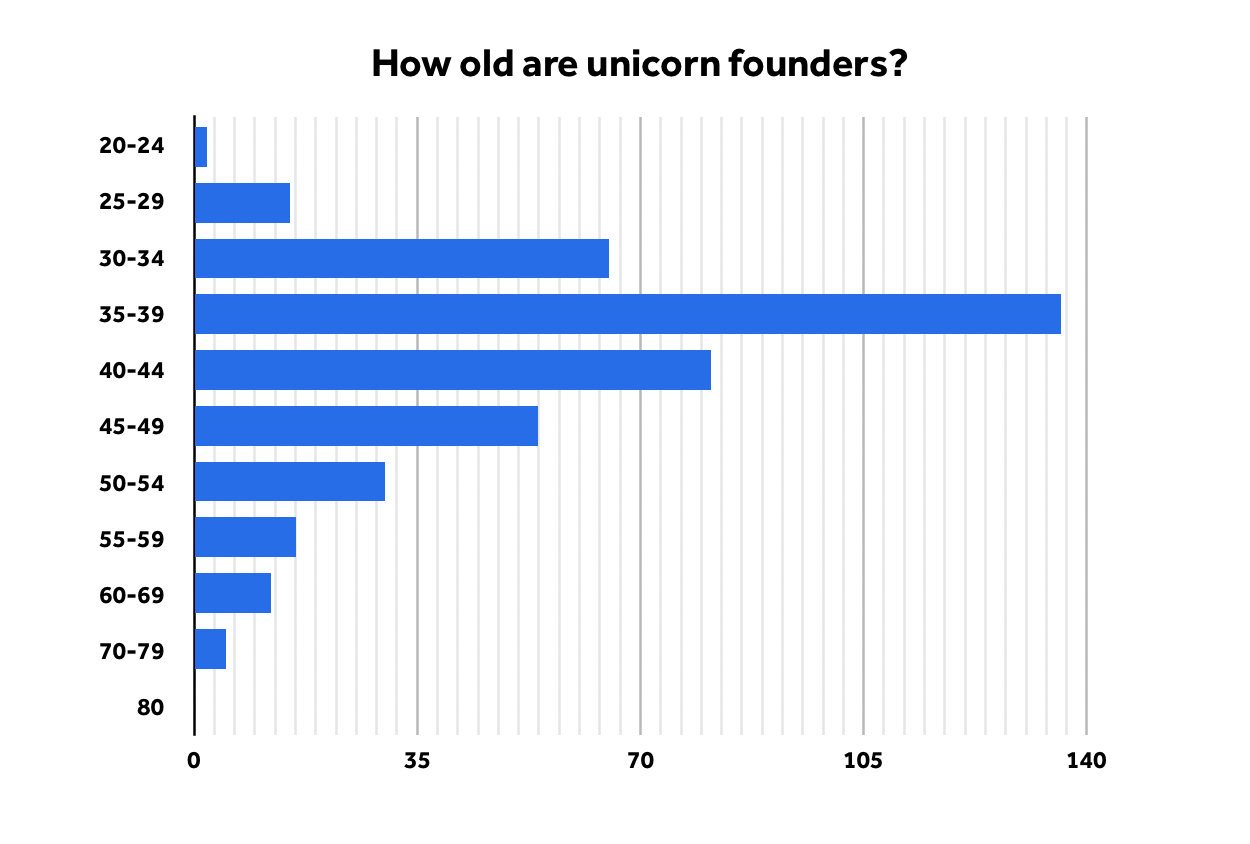 We use cookies and similar technologies. You can use the settings below to accept all cookies (which we recommend to give you the best experience) or to enable specific categories of cookies as explained below. Find out more by reading our Privacy Policy.