Over budget? Delayed windows? Living in caravans? It’s been almost 20 years since the iconic series Grand Designs came on TV screens, and found a place in the country's home-building hearts.

To celebrate the UK’s longest standing property show, we've watched every single episode (over 125 hours…) to take a closer look at the talismanic series, examining fan favourite statistics, including budgets, locations, and how much you could make if your house was on the show!


Certain locations crop up more than others on Grand Designs. We've created a chart and a map to outline where most of the Grand Designs houses have been built across the past 19 series. 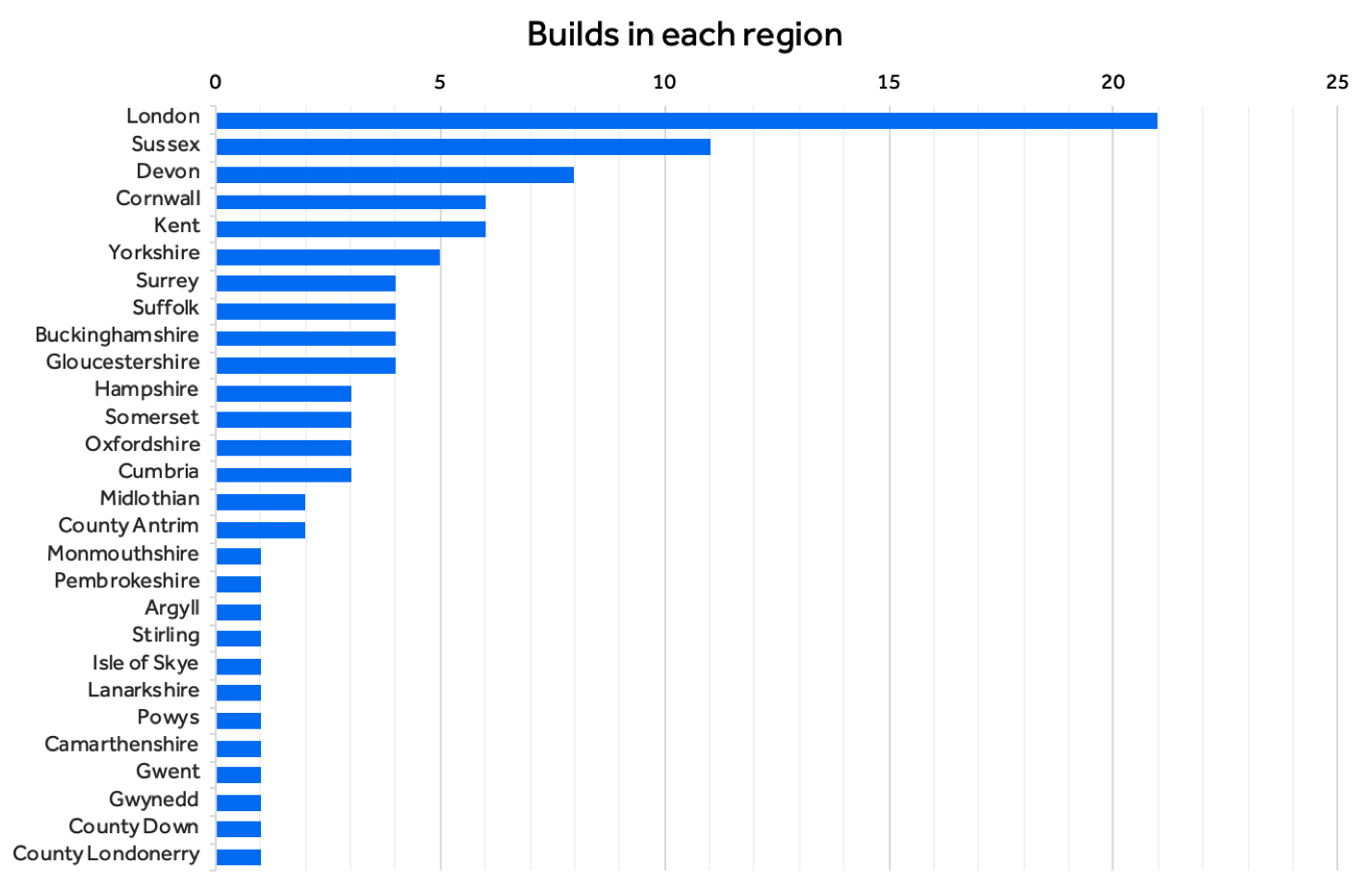 From the chart, we can see that 21 properties were built in London, while Sussex came in second place with 11. After the top 2, the regional self-build hotspots enter the fray, with Devon, Wales, Scotland and Cornwall all attracting more than 6 appearances each across the last 20 years.

A North/South divide does exist within the show as there are only 23 properties built in the North, compared to over 100 built in the South. In London alone, a total of £12,870,000 was spent on building the 21 Grand Designs properties. 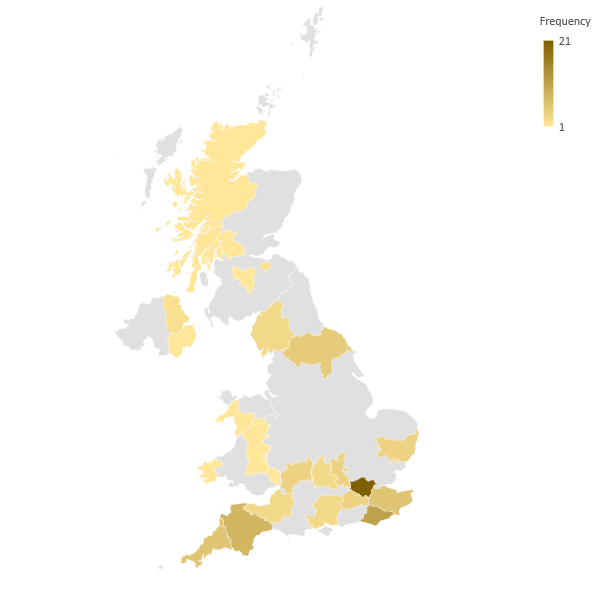 
Everyone who builds a house on Grand Designs sets out a budget that they intend to keep within fans of the show will certainly know this is one of the main challenges for self-builders.

Overall, 80% of the Grand Designs go over budget, with only 8% under budget and 7% on budget. 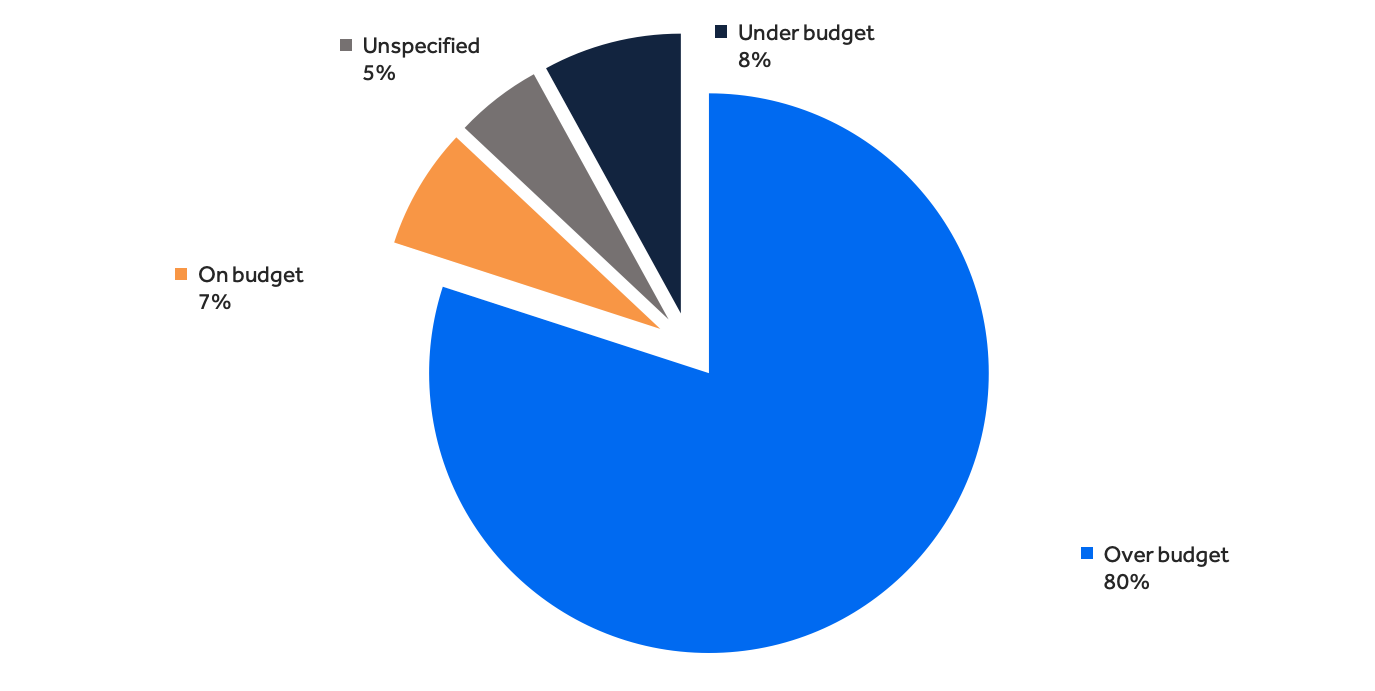 Average and total spend per build 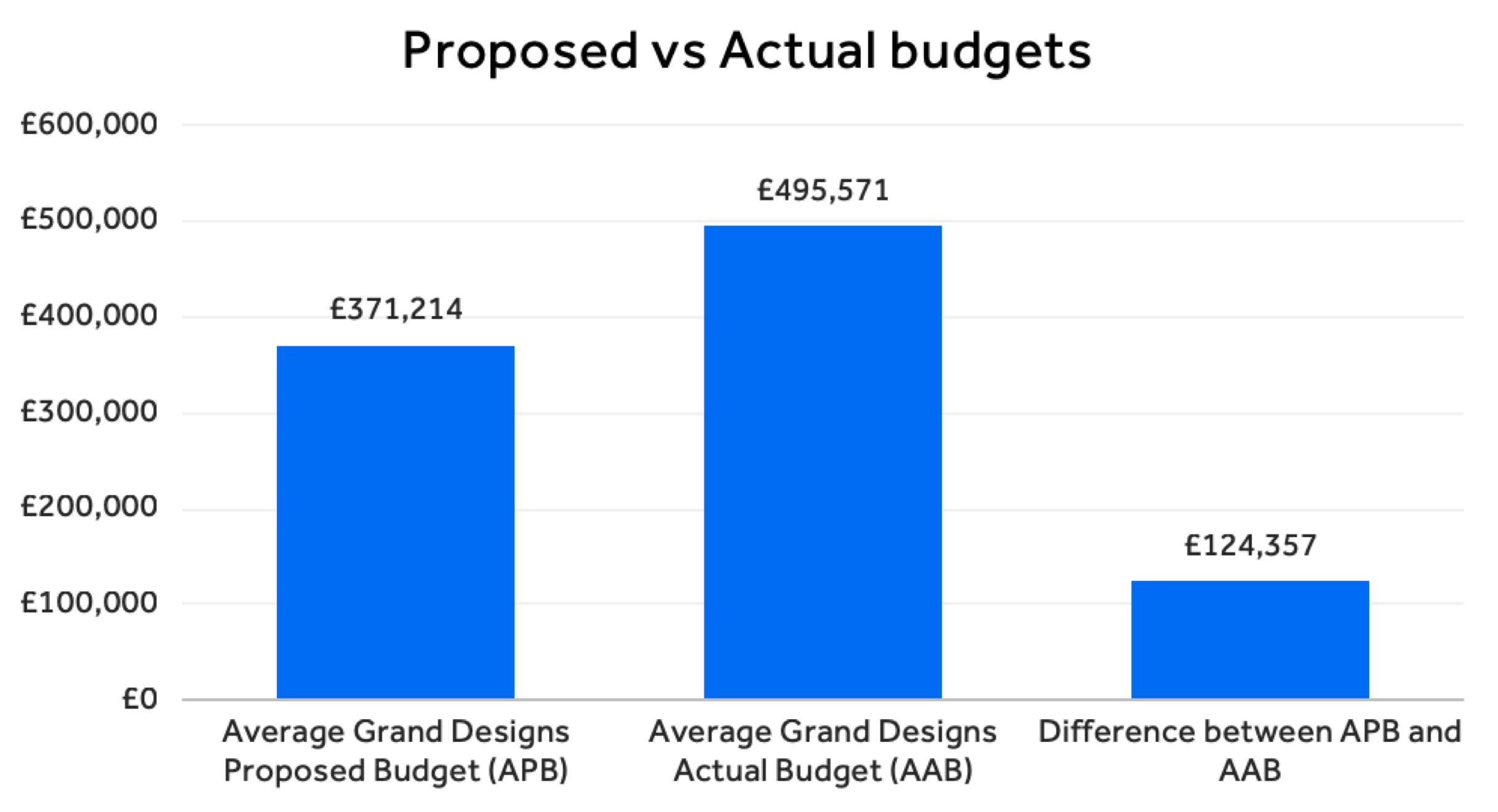 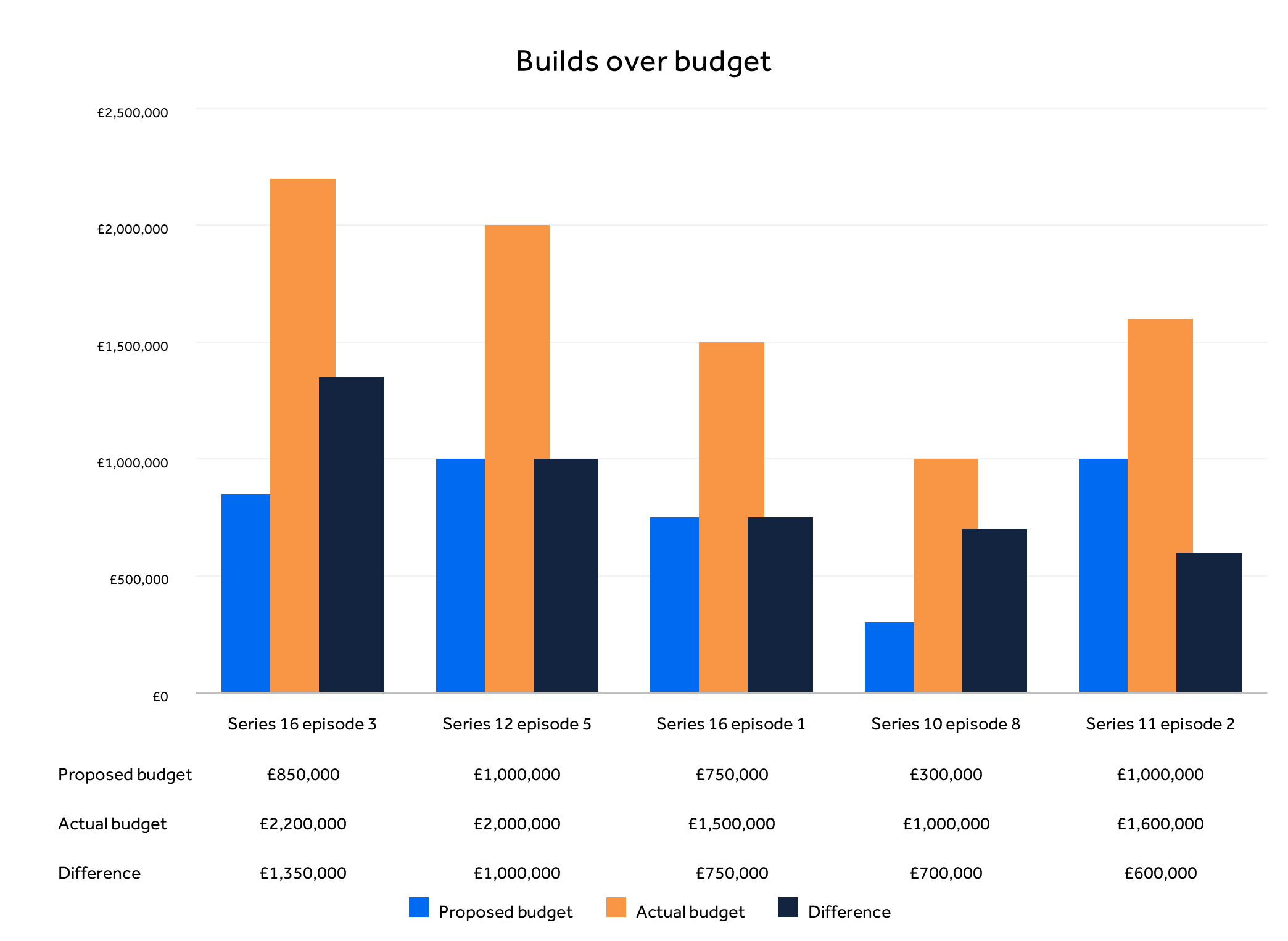 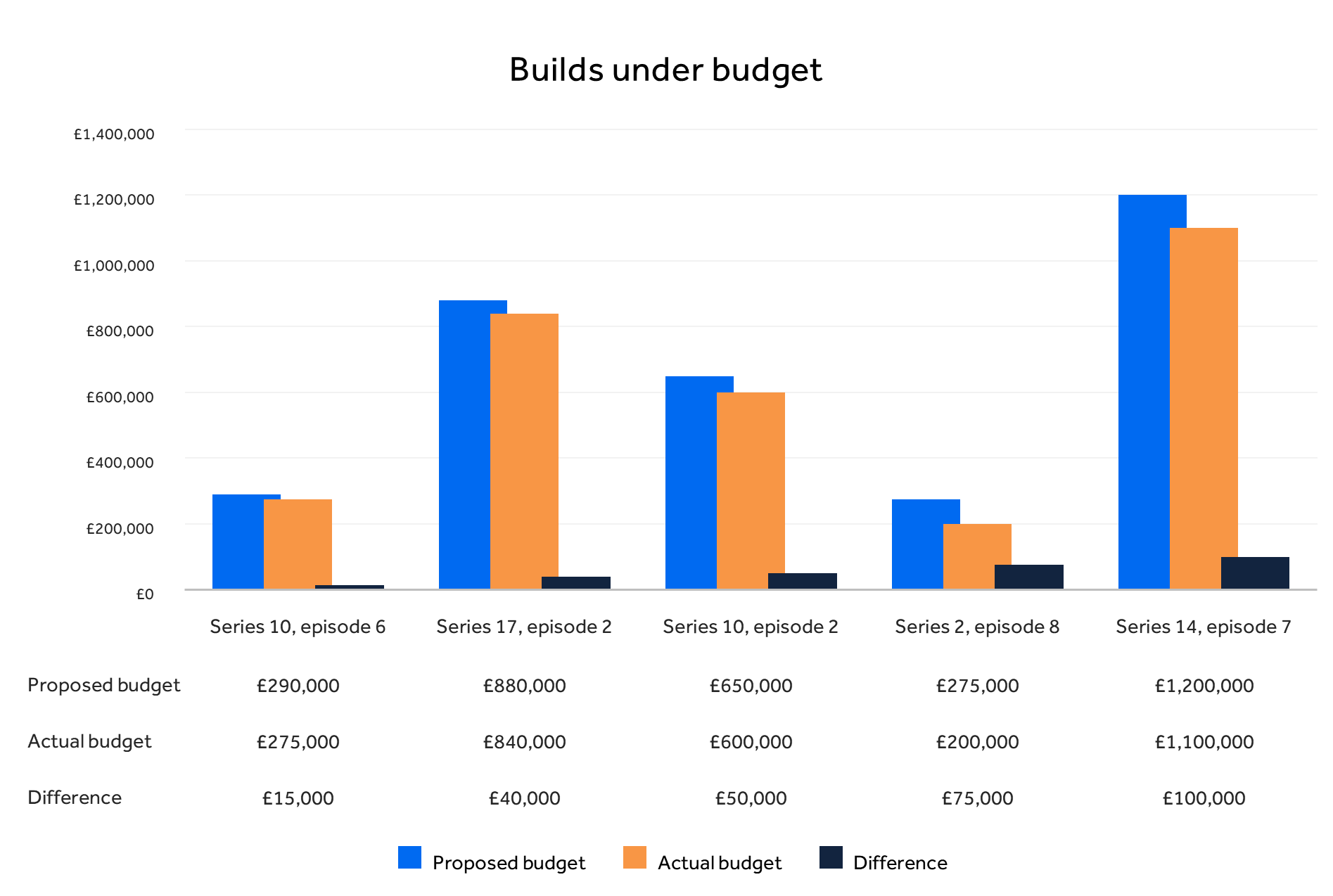 The Floating House (Series 14, Episode 7) built by Andy and Nicki Bruce went under budget the most out of any Grand Designs build, spending £100,000 less than they initially intended to. The other properties which went under budget by the biggest margins were the Derelict Barn from Exeter (Season 2, Episode 8), and the Stealth House (Season 10, Episode 2) which both came under budget by £75,000 and £50,000 respectively.


Plotting the budget ranges Grand Designs were built within


You’d think that the luxurious self builds featured on Grand Designs are guaranteed to cost an arm and a leg, but this isn’t always the case

A Grand Designs house goes on the market at £1.28 million – 108% more expensive than it originally cost to build approixmately.

How long does a Grand Designs build take

Although the majority of Grand Design homes are built within two years, many of the houses on the show can take more than four years to complete as fans will be aware of the financial issues that self-builders run into. In some cases, a few houses from the show take up to 7 years to build (The Devon Cob house), and even one or two are left unfinished forever (The Eco Barge, Medway). 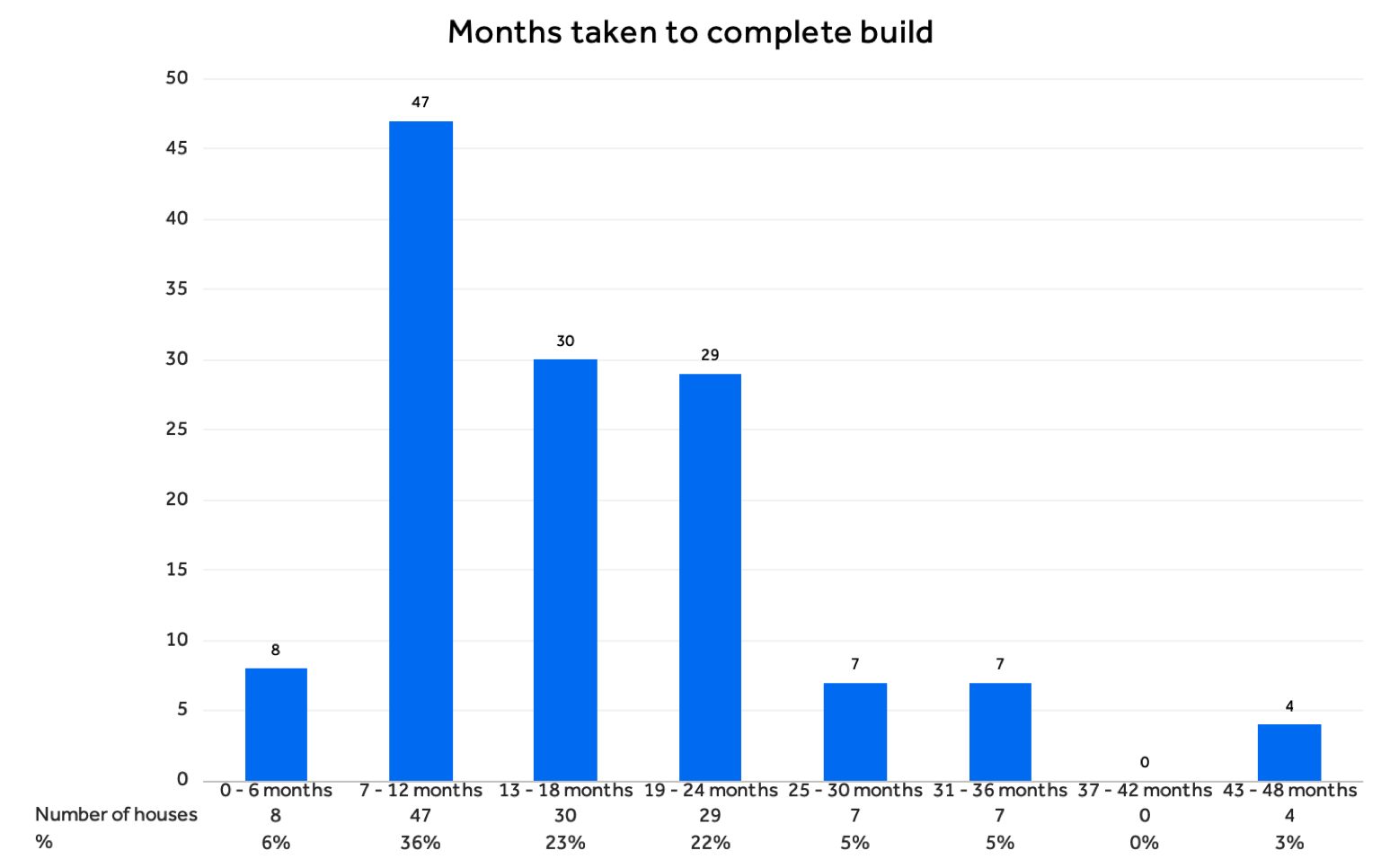 
Across the past 18 series, we’ve seen triumph, failure and persistence. The South seems to conquer, with the capital thriving in showcased builds. Some self-builders have come in spectacularly over budget, while others have won when watching their wallets. We’ve seen caravans, ecohouses, numerous babies that been born during the build, and homes that are literally staying afloat by the skin of their teeth.

This year marks the 20th anniversary of Grand Designs, will you decide to be featured on the show? Anything’s possible…